Having bought the RA4S I had been some what disappointed in the overall performance, I question if the software performance is limited to avoid cutting into more expensive commercial products.

Secondly I expected kspect software to be more sensitive with RA4S in a shielded lead castle- it didn’t behave as I expected.

The device is marketed with an audio output and comes with combo jack cable that will connect to an ipad and imetry can be used- this showed the beginnings of the possibility of other audio pulse shaping gamma spectroscopy.

Having tried with a pc I found the output to be too low and also swapped out combo to 3.5mm stereo lead.

Having pondered the possibility of a pre amp and my low noise sound card that works with Pic scaler and Theremino MCA, I built a

This has the same NE5532 chip I have used on an Asus Xonar DS card in the past with theremino.
I built the £6.99 amp with shielded 3.5mm jacks and cables and put it i a project box.
Frustratingly I found Theremino to give what should be suitable pulses, but a dead zone in detections.
Scratching my head I decided to try my low noise usb sound card and the pre amp with Becqmoni
http://translate.google.com/translate?hl=en&sl=ja&tl=en&u=http%3A%2F%2Fblog.livedoor.jp%2Fkabuworkman-becqmoni%2F
Here are my results, 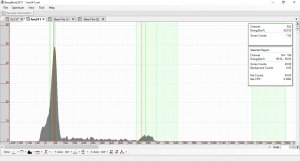 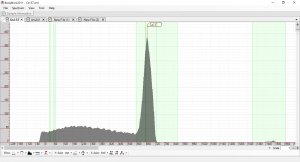